This guide isn’t about knowledge.

Once upon a time, people believed knowledge was power and wished for more of both. But now, with more knowledge than anyone can handle on the internet, people are drowning in it. The last thing the world needs is more drowning material, that is, more knowledge.

I am driven by what I feel and have never seen the point in tarting it up. I lament the legal wool pulled over people’s eyes as we speak, curse how the children are misled at school, and despise the people who defend what’s going on tooth and nail.

More of the same will not change anything and, if the past is anything to go by, fighting the old doesn’t work.

It takes a new model that makes the old obsolete.

With thanks to Marcus Aurelius and the people who have translated his writing into words I can understand, for without them, I would still be going in circles.

How to get maximum value from this guide

Here are two things only you can do to make this guide an interactive learning and extend it into an on-going experience.

There exist 1 million species of insects, 10,000 species of birds, and 5,000 species of mammals, but only 1 is on top of the food chain, the most advanced life form ever, and ready for breakfast on Mars. (All numbers approximative, except 1).

How come? What happened? What has truth got to do with it?

Some say the truth is word for word in a book they have a copy of. Others believe the universe is written in math and should be called the unimath instead.

Adults just love acting as if they knew what they’re doing.

The children ask, “What is true?” and the adults say, “It depends on who you ask.” For the adults it is okay because we have gotten used to it. But for the children, watching adults perform to magic mirrors is confusing as hell.

For these and other reasons as well, the ultimate guide to truth answers the children’s question, as opposed to proving the adults right. It doesn’t mean I’m pro-kid or anti-adult which would be grotesque for without the adults I wouldn’t be here.

All I’m saying is let the children ask.

The heart of the matter

The heart of the matter is truth is a word.

To understand what that means, you must return to when it all began. 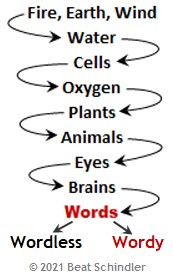 Words have divided the world into the wordless and the wordy. But that was then and things have changed. From presumably just one word in the beginning, words have gone forth and multiplied to what we’re faced with now, that is, more words than anyone can handle.

Billions of them, according to those who pretend to have counted them all, presumably to know how many words it takes to fill the internet.

The common mistake people make with words, is looking at them for sense and meaning.

It is in vain because words come without sensory organs. The one with the senses, the sensational one, is you.

And to know what a word means to you, no word can know it for you.

When it’s about words, it is all up to you.

Nothing is true until believed, and change is as powerful as gravity, and as pointless to resist. And things have changed in deed.

Once upon a time, truths used to last forever, but in the meantime,  the half-time of truths—the time it takes for an old truth to be supplanted by a new—has shrunk to the point where there are more truths faster than anyone can handle on handheld devices anywhere in the world.

We are not only the most informed people ever to have walked the Earth, but also the most confused ever. And when confusion reigns, strange things happen.

People mistake stating a point for making a difference, don’t trust their own eyes, believe in hearsay and hearsee instead, demand tolerance for the intolerant, believe the enemy of the people are (other) people, and men who read only one book still yield enormous power. That’s when otherwise good people turn into monsters.

The best protection against other people’s truths you may later regret, is to believe the opposite is true for a minute or two.

In the wordless world

In the wordless world, there is no truth for self-evident reasons.

In the wordy world

In the wordy world, people behave as if all is fair with truth on your side.

In other words, truth is a word people are willing to love, kill, and die for.

The truth about truth

Was is the truth about truth? Has it been invented, created, or discovered? Or did it happen by coincidence, out of the blue?

Fact is, it is shrouded in mystery.

The only thing we know for sure is it was made up by one for whom the existing words weren’t good enough.

Ours is a golden opportunity to change the world.

It is golden because even religion and science agree the fact truth is a word can be denied only by confirming it.

Five years from now, this will be normal. The story of words will be told at school, pupils will know the meaning is all up to them, and surrendering one’s senses to strangers will be out of fashion.

In the meantime, the squabbles over the truly truest truth will continue unabated, but that doesn’t mean you cannot take advantage of the golden opportunity now.

There’s no need to wait for the world to change first.

This completes The Ultimate Guide to Truth.

You can pray every day for the truth, but until you start acting it, nothing is going to change.

Implementation is simple and, like all things simple, difficult to explain without defeating the purpose of simple by making it complicated.

There may be resistance, initially.  If so, keep in mind giving up something familiar now for something better later is not a sacrifice. It is an investment.

That said, with nothing but explain in mind, here are a couple of things you can do to begin without further ado.

Trust your own eyes again as you did before you changed from wordless to wordy early in your career, between the ages of 1 and 6 (on average). Believe what you’re looking at are words. You know this step is complete when you see there are no truths here, only words.

The rest is technique.

Accept words for what they are. Because the exact opposite is taught at school, this may take time getting used to.

The captain of your words

Beginning with truth, make sure the captain of your words is you.

Knowing what truth means to other captains is required only in marketing, because marketers must know the lay of the land, well, I guess the lay of the sea. But even in marketing, nothing beats being in charge of your truths and your words. Keep in mind, you is also a word.

Get rid of truth and substitute it with words that come with a fair-er chance of knowing what you’re talking about, such as perspective, fact, or view-point. It takes work, but on the upside, you must do this only once.

What not to do

The last thing you want to do is ask others to stop using truth, too. Not only because people will conclude you’ve lost your mind, but also because knowing the truth about truth is not a victory march.

Determine your environment, for it determines your friends, and your friends will determine the quality and direction of your life.

Seek the company of the curious. Avoid the people who preach truths for their own selfish reasons only.

Keep a journal. To know the truth about yourself by yourself, there is no more effective method I know of.

At kindergarten and school…

…the young ones are encouraged to accept words for what they are not, not ask too many questions, and feel inadequate should they misplace a comma.

Who wants their kids to know truth is a noun? Why are words not taught at school? Talk about someone easy to exploit.

When we are controlled by words, means everyone else can control us. The benefits of accepting words for what they are can be known only after the fact, which you will.

In the long run, having to look up truth on a handheld device will only wear you out. But when you know what truth means to you, then truth is a fixed star, many decisions are already made, and you can help others too.

The internet is the most recent technology to store and transmit more words faster to every corner of the world than anything invented for that purpose before,  hence its popularity.

Doing more harm than help, these pages ought to be taken down not by the law, but by the love of those looking for truth, some of whom are children. At the very least, the surgeon general ought to issue a warning.

It’s not what the word does.

It’s what the user does.

We all wake up to the same words and, therefore, the same truths. The difference is how we respond.

That’s where the user’s freedom is. But to every yin there is a yang. Like all things worth having, freedom takes work.

Of course, others will be overjoyed to do it for you, for free. Talk about someone easy to manipulate. But in the long run, not doing what is necessary will cause you more pain than doing it.

Some years ago—precisely when he doesn’t remember—having lost everything money can buy, the author of The Ultimate Guide to Truth, Beat Schindler, inspired by…

“If there’s a book you want to read, but it hasn’t been written yet, then you must write it.” – Toni Morrison

…set about writing The Story of the World According to Words, published in December 2019. Since then, Beat has decided to serialize the story of the world word by word.

He is also a response coach, teaching people and teams how to get back onto the steering wheel of their experiences.

When not busy with that, he loves to share his times, loves, and laughs with his family and friends.

Of course not, because the truth doesn’t begin or end. All we know about the truth is where we are at, caught in the middle of it.

It can happen that grown wo/men, I know for I was one of them, knock-knock-knock on truth’s door until their fists fall off. But as soon as you change the way you look at words, this can happen…

…and then you can help others get rid of word-domination also.

Other books by the same author

What famous people are saying about truth

Specifically, you release the author from any liability with regards of what you decide next. The words are provided as is, without guarantees of any kind, and may include the opinions of people not related to the author.

As the book is written in Swinglish, a mix of Swiss and English, you may realize or realise curious now can later be curios, but you accept this is no reason to take the author to court.

Results, if any, will vary from person to person, are never typical, and hard to predict. You must obtain professional advice before taking any action based on the words here.

The Story Of Words, Last Train To Simple and other books by the same author are Schindlersword-productions by Beat Schindler in Biel-Bienne, Switzerland. © 2004-2021